So what's a scenario game and why should I play in one? Good question, a scenario is a large format game, possibly more then 100 players. Large games are very hard to fine and can be a riot when run well. Nothing like a 5 on 5. They are fun for players of all skill levels. If you have a group of friends that want to stay together we can do that. However the more restrictions you put on us like I only want to play with my friends the harder our job gets to be. So work with us and we'll work with you.

Sometimes I describe a scenario as *flavored paintball*. Which means there is a story line and we play games or (do missions) that support the story. So let me explain what the story is and what the play will be like.

We are putting you into an apocalyptic world. Those that have survived are doing their best to find food and avoid the robot warriors who are there to hunt them down and eliminate them. You will have a base either red or blue depending on which team you are fighting for. You will go out and search for food in small groups. Once found you will try to get it back to your base. If you build up enough food you can take it to the entrance of the underground city and trade it for technology to help you. Sounds simple right. Well here's the problem. Not only can you benefit by stealing the other teams food. But you are at risk of them doing the same to you. Now as if that's not enough there are the robot warriors. 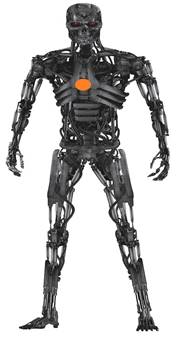 Now you will notice the orange spot in the chest of our robot warrior. It's 4 inches across and breakable. To disable the warrior you must break it with a paintball. It is the only way to stop this guy. He can carry a marker in each hand and moves only at a walk. So they are hard to stop, slow moving and pack a lot of punch.

Now once one is disabled, he will stay still for 60 seconds. Then if not altered he will return to his base in a non-fighting mode and replace the orange disc and return to the hunt. But this is where technology comes into play. If you have collected food and traded it for tech, you can get a control disc. In the 60 seconds the warrior is disabled if you can put in a disc of your color, you take control of him. You can then use him to attack or defend for you. While under your control, if he's disabled again with another chest shot, you must get a disc in him in 60 seconds or he returns to base to go back to hunting and eliminating all humans.

That is one of the reasons technology is valuable. The other piece of equipment is a cloaking device for your base. It protects your base from the warriors. They can come up to the edge but not enter so it offers some protection to you. So the control disc and the cloaking device are the 2 pieces of tech you can trade for at the underground city.

Food sources will be replenished during the game so there will always be something out there to find. Any player that gets eliminated will return to their base and check in with the base ref. Then they will be allowed to re-entry the game. This means you get as much playtime as possible.

Each base will have a supply of paint, water and snacks and a safe place where you can take a break, you can even bring a lunch and we'll keep it in the cooler for you.. In the safe area you can take your goggles off, but no markers are allowed in this area. Also no player leaves this area without his or her goggle already on. 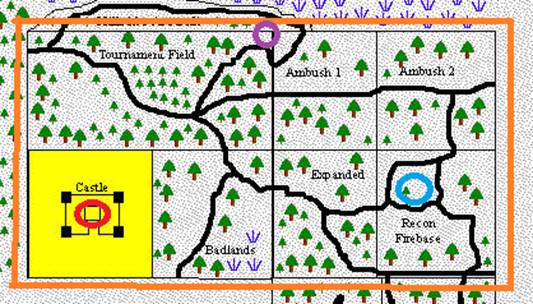 The map above shows the playing area we will be using. The Red base at Castle The Blue based at Recon and the Purple, which is the entrance to the underground city where you trade for tech. That is located in Firebase Alpha. The Robot warriors will be starting on Tournament field, Badlands, Ambush 1 or Expanded. But they are free to move about independently. Things to remember, if they see you they may start to follow you.

If you shoot at them they will follow you. They also will be attracted to sound of gunfire. So if a Red patrol engages with a Blue patrol expect to see the robot warriors come to investigate and eliminate everything they find. They can only move at a walk to hit and run and move out quick and they will have trouble hunting you down. So you may be asking if we stay in small patrols how is this a big format game. Well it's simple; someone will make a mistake and attack a base. Lets say the red team hits the blue base to steal their food collection. 50 red players open up on 25 blue defenders. Over the next few minutes you could well see the robot warriors close in from the rear. You could also see the blue patrols return when they hear their base under attack. So in short, if you don't hit fast and move out you could get caught in a total brawl with 50 on 50 and 3 killer robots trying to do in everyone. You may even have to put down cover fire for the robots so the other team can't get to them and take control of them. Using your head and understanding what's going on will get you a win.

That's it in a nutshell. Not too complicated, just remember to play the missions like they were important and all will go well. We will be keeping score of the players each team losses and the amount of food they trade in and have at the end of the day. With that we will determine a winner.

Give this a read and let us know what you think. It's early enough so that if anyone gives us ideas we can implement them for the scenario.